During Smau 2015, Zucchetti Group, through the testimony of Mariarita Costanza, technical director of Macnil Zucchetti Group, explained what are the characteristics to be one startupper winning and convincing funders to invest

Serves the ‘creed’, the dream, the willingness to take risks and the need to make sacrifices. These are, according to Mariarita Costanza, technical director of Macnil Zucchetti Group and judge of Mediaset show Shark Tank, aired last spring, the essential ingredients to start a startup and to succeed.

Success even in the face of investors who can not get a feeling of uncertainty or discomfort to invest and believe, in turn, in the startup or in startupper that is revealed to apply for funding.

The discussion on the role of startup and what it means today ‘set up’ a start was made on the second day of Smau 2015, a showcase also on a host of startups that could show their ‘dream come true’. 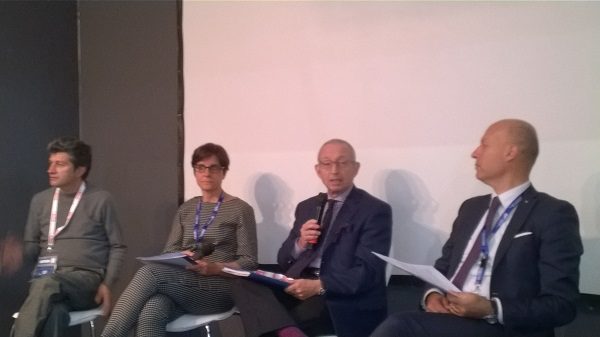 But to do the honors was Antonio Grioli, president of the steering committee of the Zucchetti Group that has pitted some numbers concerning the company that Lodi for 35 years is on the market with both customer numbers of employees is increasing. Shouting are not only companies that make ads assumptions dizzying, those who take, the Group also takes on full time contracts, the chairman of the steering committee stressed “108,000 customers who were detached bills paid regularly, 360 million euro of turnover, 1150 partners on the territory that customize solutions Zucchetti bringing them closer to their customers. Zucchetti is a company oriented to the technology of which 25% of the turnover is produced abroad, thanks to the opening of branches in the United States, Brazil, for example, and 160 distributors around the world. ”

Grioli said that Zucchetti is engaged in different sectors of the market: the physical security, robotics, home automation, making innovation. On this point, the President cited the startup, or ‘star-stages’, as he calls them. But the real action ‘Amarcord’ comes from Costanza, which is in the dual role, precisely, and recalls how Macnil was acquired by Zucchetti group because the group is “forward-looking, attentive to innovation and has seen Macnil, expert Iot , the market of the future with its 50 billion connected devices by 2020, “said Constance, who rethinks his past when, with her “business” partner Nicola Lavenuta, went to the bank to apply for funding. Even the manager is defined as a start-upper, at least 15 years ago when he was born Macnil.

And, the stage of Smau springboard, at least according to Gianluca Dettori, venture capila pixels and he judge the transmission Shark Tank. “Smau is being revived with a new DNA, a DNA that speaks of newness, of startups that are the major software companies today.”